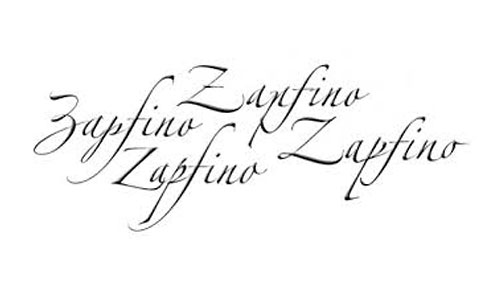 Zapfino has two versions available of its OpenType font format. Firstly, the contextual version is filled with amazing features. When the font was created back in 2004, it was then considered as the most-advanced one to be released at that time. It also has 48 western and central languages.

For its history, the font was designed by highly-acclaimed calligrapher in the person of Hermann Zapf who envisioned to liberate the typeface industry into something “lively,” “free,” and “beautiful.” The first Zapfino font was released sometime in 1998, which initially consists of four letters in the alphabet plus more stylish alternatives infused together to achieve readability. The reformatting of Zapfino came in 2003, when Herman Zapf created the Zapfino Extra, which he made in collaboration with fellow designer Akira Kobayashi. With its transformation, Zapfino has a new character called cornucopia, which has exuberant characters, elegant caps, ligatures, ornaments and many other alternates. Thus came Zapfino Forte as a new version of this font.

The use of the font produces a unique addition for your ad materials i.e. packaging and invitations. It is so abundant and tempting to over indulge for many other possibilities. So, Zapfino is just the right element you need for that next project of yours as well as other purposes you have in mind.