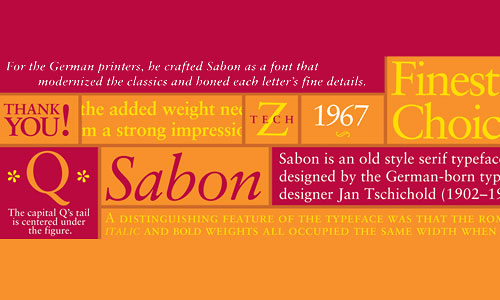 This particular font was designed in 1967 by Jan Tschichold. Sabon was designed as a response for a particular need of printers from German groups with an aim to produce a typeface with resemblance both in form and technology of only the best and finest variations. Monotype Sabon was named after a 16th century typefounder named Jacques Sabon whose widow married Konrad Berner, also a typefounder who is credited with the issuance of the first specimen sheet of a typefounder. There has been several versions placed on the sheet linked to Claude Garmond, and these served as the source of Sabon’s roman which was also used by Tschichold. For the italic, the same was based on Berner’s other sheet which contains another typeface which was a cut by the person of Robert Granjon. Also, a skillful adaptation of Tschichold of these old typefaces and style has made elegant and professional fonts for books. Thus, this font family is a perfect and popular option for setting a text.

Now for almost a decade of being in the market, the font has evolved to be applied for all sorts of purpose and platform, whether online or offline. It is something worth considering as it has the perfect element for readability, flexibility and multi-functionality.