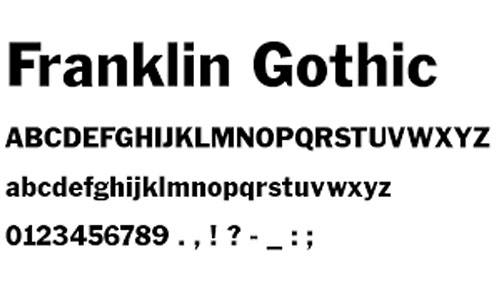 The font is designed by Morris Fuller Benton for a company called the American Type Founders for a period of 1903 to 1912. The name was inspired by Benjamin Franklin but the design has no resemblance to the early American statesman and printer. The font designer was a prolific one for being able to make several fonts of the sans serif family. In fact, there were lighter counterparts of the Franklin Gothic which were infused in appropriate designs.

ITC Franklin Gothic is one of the bulk on Benton’s masterpiece; having the amazing artisans for revival and expansion. The original version of the font was re-drew by Victor Caruso in 1980 and the design was given more weights. In 1991, more compressed and condensed weights were added by David Berlow. With over a dozen of style and weights, the font eventually became a favourite and ready for duty in certain situations from solid corners of a printed document to powerhouse spaces of media platform and websites.

The best thing about Franklin Gothic is its letters “a” and “g” plus a subtle contrast of strokes as well as the thin round strokes which merge to stems. The font type appears an overall dark and monotone look with a robust modern touch. Franklin Gothic is one of the widely used types of sans serif. It is a choice befitting for newspapers, posters and advertising.