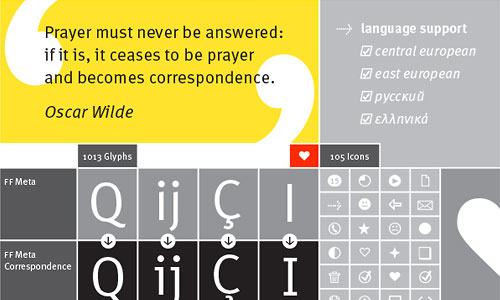 FF Meta came from the family known as PT55, which is a typeface of economical use distinctly made for readability even despite its small size feature. This was created in 1985 for the Post Office of West Germany. Later, the person in the name of Erik Spiekermann made improvements and designed its expansion to include more styles and weights. He also prepared FF Meta’s release as the first and foremost members of the early library of FontFont. When the early 90s came, at the time of the flourishing days of desktop publishing, the typeface grew and became popular amongst people. Its widespread popularity was due to its clean, multi-faceted, cheery and distinct aesthetics for an array of uses including correspondence and signages.

As a font, FF Meta has eight weights for both normal and condensed type. It is likewise available in Serif and several other variations that fit for use in headlines or daily office use and application.

In 2011, New York’s Museum of Modern Art added the font as its permanent collection. It is a very rare opportunity since a very few has been selected to represent its typography section in this digital era. In fact, only 23 was chosen by said Museum.