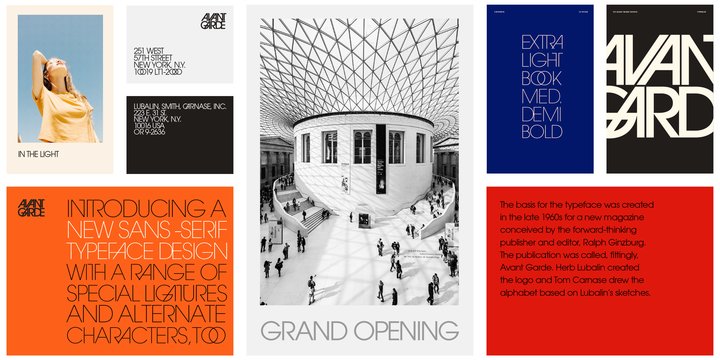 ITC Avant Garde Gothic was designed by Tom Carnase and Herb Lubalin in 1970 based on Lubalin’s magazine logo, which was a fun creation of overlapping geometric capitals tightly-set for use. It is a sans serif font with richness in circles, straight lines and basic shapes inspired from the 1920s movement of the German Bauhaus. ITC Avant Garde Gothic’s original versions were illustrated for its inimitable ligatures and alternates that continue to invoke the 1970’s typographic characteristic. It has a dense, contemporary appearance which makes it a favorite among graphic designers. ITC Avant Garde Gothic is the 31st bestselling font to date.

Its huge, tall, and open x-heights counter depicts boldness and honesty while maintaining a friendly and cheery presence at the same time. It is suitable for headlines, highlighted texts, messages, and commercial descriptions.

During 1974, ITC Avant Garde Gothic’s condensed weight was abstracted by Ed Benguiat; whereas its oblique was designed and finished by Erich Gschwind, Andre Gurtler and Christian Mengelt in 1977. After over 5 years, Ned Bunnel made a monospaced version of the font. 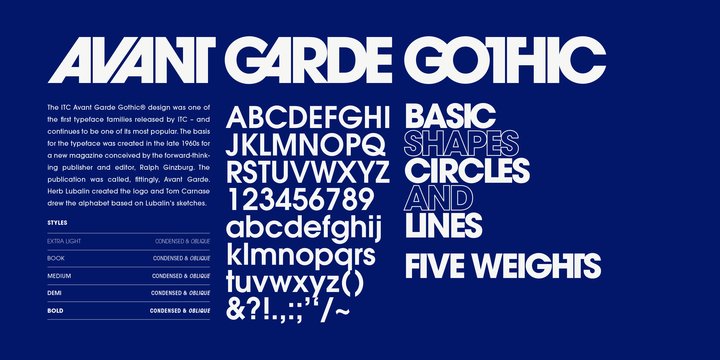