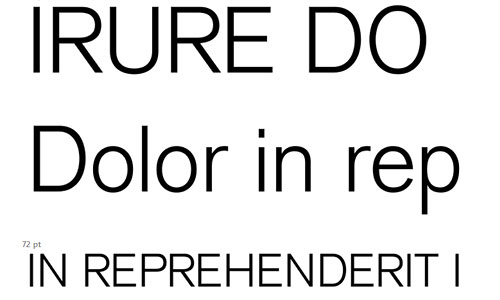 Basic Commercial was first released in 1900 with elements based on fonts from yesteryears particularly the hot metal font type era. The designers created this typeface in such a way that users cannot overlook the uniqueness it will bring to the material when applied. As a matter of fact, it has been popular in Dadaism, Bauhaus and the typography masters of International-Style and Swiss. Since its inception, Basic Commercial has influenced a variety of grotesque fonts, including Univers and Helvetica. The font was then distributed in the US by Standard Series and worked its way through the lives of different culture every day. In fact, NYC’s subway system used the font for its signage.

For its design, the font is very objective and clear. It exhibits nothing unusual but nonetheless it remains both legible and lively in the eyes of popular graphic designers. For decades, this type family has offered several weights and have been available versions that are soft-rounded.

Basic Commercial is available in 8 different styles. It supports a hundred of languages like Spanish, Portuguese, English, French, and German in Latin scripts, which all formats can be availed of. The price for this font starts at $45 for single style and $251 for its packages.