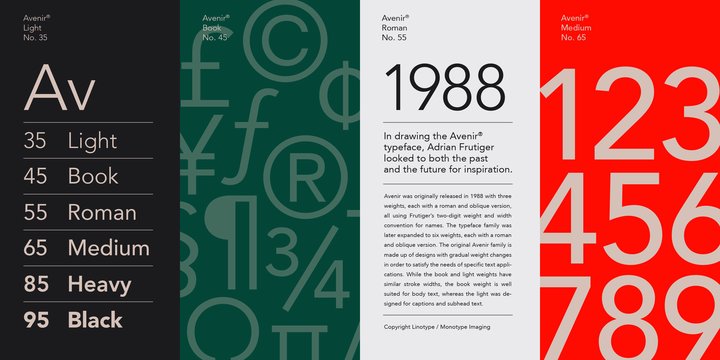 Avenir was designed in 1988 by Adrian Frutiger after expressing so much interest in the sans serif typefaces. He believed that the stylistic developments in the 20th century need to be shown to everyone. Hence, he came up with the Avenir font which means “future” in French. This is his version of the Futura font; but with some differences in strokes.

Avenir is not purely geometric compared to Futura. For example, the letter “O” is not designed in a perfectly rounded circle which we often see in many fonts. The vertical strokes are thicker and heavier than the horizontal strokes.

Avenir is best used in headlines and text because of its readability, functionality, and pleasant appearance. The light weight blends perfectly in any paper that’s why many printing companies use this font for their headlines.